Mar-A-Lago (“mahr-ah-lahgo”), built 1924-1927, is the name of the Marjorie Merriweather Post estate in Palm Beach, Florida. Post built the house with her (then) husband, Edward F. Hutton. The house was designed by Joseph Urban. Upon her death in 1973 Marjorie Post willed the 17-acre (69,000 m2) estate to the U.S. Government as a retreat for Presidents and visiting foreign dignatories. The mansion was not however used for this purpose, prior to being declared a National Historic Landmark in 1980.

Mar-A-Lago has frequently hosted the International Red Cross Ball, an annual white tie, tails, and tiara ball. Founded by Mrs. Post, it has a history of attracting wealthy socialites and ambassadors from across the world in support of the mission of the American Red Cross. Now home to the Mar-A-Lago Club, the 126-room, 110,000-square-foot (10,219 m²) estate is owned by Donald Trump. After acquiring the property in 1985, Trump had the property renovated, with 58 bedrooms, 33 bathrooms, a 29-foot (8.8 m)-long pietra dura marble top dining table, 12 fireplaces, and three bomb shelters. Also, the home has five clay and one grass tennis court with a waterfront pool. Further additions have been made since then, including the recent construction of a 20,000-square-foot (1,900 m2) ballroom. The name Mar-A-Lago is Spanish for “Sea to Lake”. In 1994, Michael Jackson and Lisa Marie Presley spent their honeymoon at Mar-a-Lago. 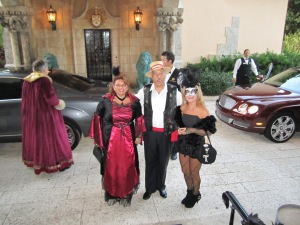